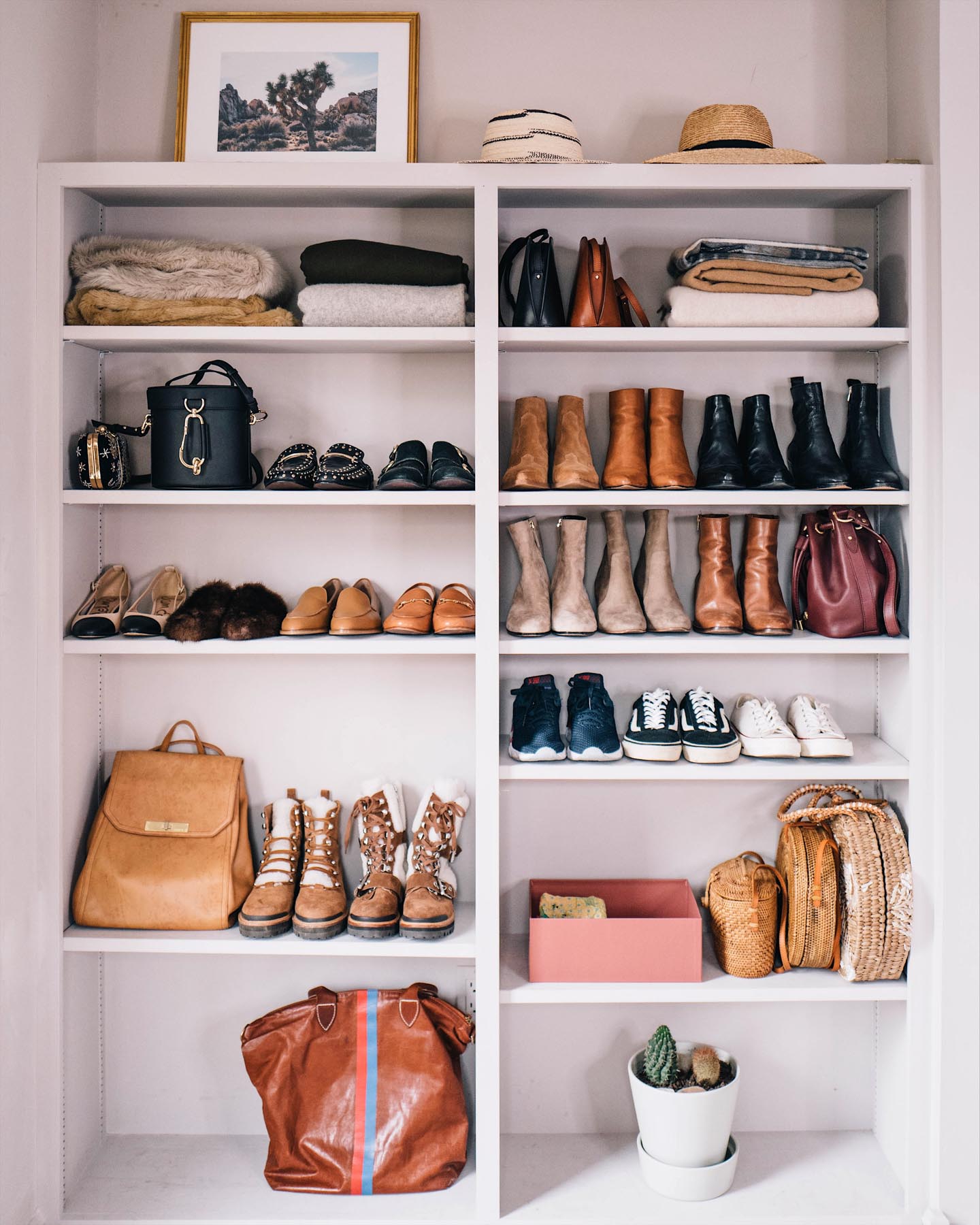 I’m pretty sure most of you know by now that over the last few weeks I have been on a major declutter/organization mission. Towards the end of last year I felt very overwhelmed by stuff. When I say stuff I mean actual things, but also emotional feelings and anxiety about those things. The cycle of constant shopping, gifting from brands, donating and selling items was exhausting and extremely wasteful. Then I watched Tidying Up with Marie Kondo on Netflix. I actually read her book a few years ago and I did a lot of decluttering, but I didn’t really closely follow her method. Watching the show was that “aha moment” for me, and I realized that I needed to declutter and get organized once and for all. While I haven’t exactly followed the KonMari method, it has been a huge help to me in going through my things, determining what to get rid of and what to keep. Craig and I are both people that don’t really get attached to things, so we declutter and get rid of things pretty often, but inevitably we end up with more stuff (that’s more on me than him). This time around I went into it with the mindset of not only getting rid of things and getting organized, but resisting the urge to immediately go and acquire more stuff.

As I’ve been sharing the process of decluttering, a lot of you have sent me questions or voiced your hesitation about getting started. While I am definitely not an expert, I wanted to address some of your most frequently asked questions and concerns. One of the things I liked most about Marie Kondo’s show, is that I didn’t get the sense she was making anyone feel bad about their stuff, and what they were holding on to. Her method is about imagining your ideal lifestyle, then decluttering and getting organized so that you can achieve that. Thinking about it that way made it easier for me, and really helped kick start the process. I realize getting rid of stuff, particularly when it’s sentimental, is hard and multi-layered. Ultimately I set out on this mission because I wanted to declutter, get organized and simplify my life, and it has been an incredibly rewarding experience. Most of you had very similar questions and concerns, so I picked the five most common and answered them below.

This was hands down the most common thing to come up, and I completely understand. A good number of the things I got rid of recently were items I’ve been hanging on to for years because at the time I bought them, they were expensive. Some I wouldn’t even consider expensive now, but when I bought them, they were a splurge for me, and so I had a harder time letting go. The thing is, just because I spent a lot of money on it doesn’t mean it sparked joy for me. Holding on to it actually made me feel worse in some cases because of the guilt and regret about spending money on something I didn’t use or didn’t really like. For me, there were three options to get rid of those items, sell it (see some advice below), give it to a friend or donate it. If selling didn’t work and none of my friends want it, it gets donated. When I was in my 20s living in Brooklyn, I did the majority of my shopping at thrift stores, and I like to think about someone finding something I’ve donated and getting joy out of it the same way I did. Ultimately for me, hanging on to something just because I spent a lot of money on it ended up making me feel worse than just getting rid of it.

What if I need/want this thing in the future?

The answer to this sort of depends on the nature of the question. If, like me, you live somewhere with seasons, it’s understandable to have some items that you’re going to store, I think that’s ok. I have one plastic bin of summer items in the basement right now, and when summer comes around, I’ll put winter items (coats, boots, thick sweaters, hats, etc.) in a bin or two and store them. The other aspect of this question is more related to hanging on to things you worry you might need in the future (if something comes back in style, if I lose weight, if I go back to an office job, etc.). Keeping stuff around for the “what ifs” can actually bring on even more feelings of guilt. If you love something, keep it, don’t worry about whether or not it’s trendy. A quote from Suzan Colon in this recent post really stuck with me, “Certain physical objects can also be reminders of negative experiences and can trigger self-limiting thoughts. I kept all of my suits from my corporate job in my closet just in case I ever needed to go back.” I remember doing this same thing. I hung onto work clothes from my old job for years. It wasn’t until last week that I finally got rid of the rest of my work heels. I don’t need or want them and I certainly don’t plan to go back to a corporate job, so why am I keeping them around? Getting rid of them felt like finally putting a close to that chapter in my life (and I left that job 5 year ago!).

A good trick with the clothes in your closet is to put all your hangers facing the same direction. If you wear something, when you put it back turn the hanger the other way. After a month evaluate what items you haven’t worn. Do the same thing again after two months. If items are sitting in your closet for months and you’re not wearing them (and they’re in season), it’s probably time to say good-bye.

I feel bad getting rid of things that were gifts.

Here’s the thing, in my opinion, a gift is a gift. Once it has been given to you, it’s yours to do what you want with it. It is unfair for someone to have expectations about what you do with something they’ve given to you. The whole reason the person gave you the thing in the first place is to make you happy (hopefully?). If the item is no longer doing that, get rid of it. If you can donate it, maybe it will even bring someone else joy.

How do I get rid of sentimental items?

This is hard, and I think this process looks a bit different for everyone. Sentimental items can be anything from old birthday cards to inherited items from a loved one to your high school sweatshirt(s). Of course the first thing I ask myself is does this thing bring me joy? Putting the memory/association aside, does the actual thing bring me joy? If not, I’m not going to keep it. If you’re hanging on to things that don’t bring you joy but feel guilty about getting rid of it, you can always offer it to someone else in your family or a friend before donating (or selling). Remember, getting rid of the sentimental item you’re hanging on to doesn’t erase the memory or feeling. If you truly love the object, keep it, but if you’re just hanging on to it because of the memory and not the actual item, consider letting it go.

How do I determine what to donate, trash, sell?

Typically anything that’s in really good/excellent condition I’ll try to sell (if none of my friends/cousins/Mom want it first). A lot of you mentioned you want to sell things but have trouble or don’t know where to start. The longer you hang on to things you want to sell, the less valuable they become (unless they’re designer) so if you’ve tried selling something and it’s not happening, it’s probably time to donate it (which you can use as a tax deduction) or give it to a friend. There’s a few options for selling clothes. You can use sites like Poshmark or eBay though it can sometimes be difficult to sell things quickly. To keep it really simple you can use thredUP. It’s typically not a huge return but if you want the easiest option that’s probably it. You can also try local consignment and thrift stores. Check ahead with consignment stores as some require setting up an appointment. When I lived in New York and LA I’d go to Beacon’s Closet, Buffalo Exchange or Crossroads Trading all of which will go through your items the same day and you can donate what you don’t sell. If you have designer items I’ve heard good things about the Real Real and Vestiaire Collective.

When donating, items that are in good or gently used condition can go to places like Goodwill, Salvation Army, Dress for Success, and Big Brothers Big Sisters (they have donation pick-up in RI). Items like games, toys, sports equipment, books, etc. can be donated as well. You can also use donations as a tax deduction at the end of the year so hang on to any donation receipts. If you have old sheets and towels that aren’t in great condition, check with local animal shelters, they are often in need of things like this. Have old t-shirts that need to be trashed? Cut them up and use them as cleaning rags instead of always using paper towels. Checking to see what local organizations accept donations is your best bet and you can get a better sense of the items they accept.

I actually avoided watching Marie Kondo’s show when it first came out because I was afraid it would give me even more anxiety, but it did quite the opposite. You don’t necessarily have to follow her method exactly but it is a great jumping off point. Going through this process and feeling really good about the things in my closet and in my home has simplified my life in ways I never anticipated. It has made me feel like I have more freedom and more choices (even though I technically have less). I enjoy getting dressed and treasuring the pieces I’ve decided to keep. I am so much more thoughtful about when and how I shop, and what I allow into my closet now that I’ve curated it into a wardrobe that makes me happy. I’m looking at this process not just as decluttering and getting organized, but as a complete lifestyle change, and so far, it’s pretty great.